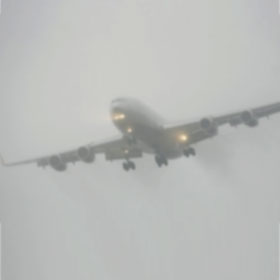 One of the decisions air traffic controllers make is when and how much to reduce arrival traffic at an airport in response to capacity reductions due to adverse weather conditions. These decisions are termed ground delay programs (GDPs). Traditionally controllers have issued GDPs by applying heuristics that only account for known (deterministic) weather and traffic conditions. NASA asked Mosaic to build a decision-support system (DSS) that accounts for weather uncertainty in recommending optimal GDP decisions to controllers at the San Francisco International Airport (SFO).

Mosaic built the GDP Parameter Selection Model (GPSM). The model consumes probabilistic weather forecasts produced by the SFO Marine Stratus Forecast System. The key random variable was the time of day when stratus cloud cover burns off over SFO. The optimization model attempted to minimize expected ground delay subject to risk-management constraints. This optimization criterion had the benevolent side effect of also reducing underutilization of arrival slots after the clouds cleared.

Mosaic built the GPSM to integrate seamlessly into existing air traffic control infrastructure, requiring no changes to the data, software, or organizational processes used to issue GDPs. This made adopting the GPSM straightforward for the decision makers.

Moreover, the gap between planned and observed unused arrival slots fell by 29% compared to the gap for the preceding three years.

The delay reductions translate into approximately $7.5 million dollars in annual airline operating-cost reductions at SFO alone, representing a 1,100% return on investment (ROI) over a three-year time horizon. When the FAA applies GPSM technology at other airports, the ROI will increase dramatically.

You can learn more about the GPSM’s technical approach from the following documents: